Motivation Monday: You Can Do It!

Motivation Monday: You Can Do It!

So I was staring at this cross-stitch piece made by my mother-in-law with different sayings that all essentially mean, “You can do it!” as the first line states. And then I thought each of the four sayings might serve as good topics for Motivation Monday posts:

*Whatever the mind of man can conceive and believe, it can achieve.

*Keep on keeping on.

*Every failure brings with it the seed of an equivalent success.

So for today, let’s explore this one:

Whatever the mind of man can conceive and believe, it can achieve.

I had to do some research and discovered on a site called The Mind Unleashed that this is a quote by Napoleon Hill, an entrepreneur and proponent of positive thinking in the mid 1900s (feels strange to even write that, since I was born in 1958!) He wrote a book called Think and Grow Rich, which sold more than 20 million copies by the time of Hill’s death in 1970.

The full quote actually says, “Whatever your mind can conceive and believe, the mind can achieve, regardless of how many times you may have failed in the past.”

Related to this quote is the concept behind the Law of Attraction, which emphasizes making positive affirmations to manifest the things you are believing will happen. The key, however, is in fact belief, not merely spouting off words or chants to try to magically force something to happen or to manifest.

Furthermore, we often fail to achieve the things we conceive, because we don’t truly believe. Instead, limiting beliefs act as a hurdle or barrier to prevent what we’re endeavoring to achieve.

HOWEVER…I do think common sense needs to bring balance to the conceiving, believing, and achieving. I’ve heard some people caution against the “name it and claim it” or “blab it and grab it” mentality. That sounds reasonable to me, because again, this is not some magical incantation that will force things to happen. Words do have power, for good or bad, and there is some truth to the concept of speaking things into existence. But we have to be careful about what we say, and combine belief with effort, to achieve those things that are reasonable and appropriate for us in our lives. 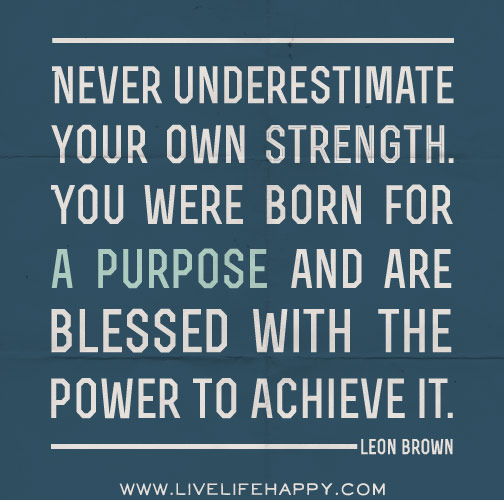 Do you believe this quote is accurate?

Have you practiced speaking positive affirmations and in fact seen dreams come to fruition in your life?

6 thoughts on “Motivation Monday: You Can Do It!”